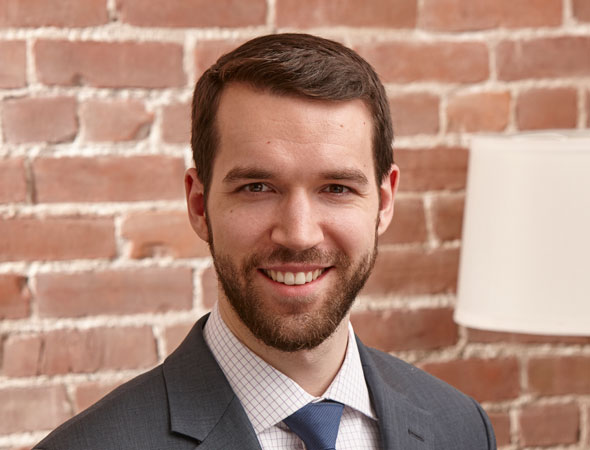 Vincent Blais-Fortin has joined the firm as a lawyer in 2015 after having completed his professional internship at the office. He regularly advises and represents cooperatives and individuals in the areas of housing law, cooperative law and general civil law. Mr. Blais-Fortin is involved in several major class action lawsuits controlled by the office, which allowed him to quickly develop reflexes and legal skills necessary for the exercise of his profession. He also completes mandates in corporate law and contract review.

Mr. Blais-Fortin has completed his law degree at the University of Montréal. During his studies, he was a research assistant of Professor Danielle Pinard. He also clerked for two judges of the Superior Court of Quebec for a year. This experience allowed him to develop a strong interest in litigation and a better understanding of the expectations of judges vis-à-vis lawyers.

Mr. Blais-Fortin is a member of the Public Affairs Committee of the Young Bar Association of Montreal (YBAM). This committee is responsible for drafting press releases, letters, briefs or reform proposals for the YBAM Board of Directors. The committee also assesses the advisability of intervening in court proceedings on behalf of the YBAM and carries out other related projects.

– Advice and representation of housing cooperatives, non-profit organizations and private landlords in matters of housing law, especially concerning applications for the resiliation of the lease for failure to pay rent, frequent delays in the payment of rent causing serious injury, behavioral problems of the tenant, bed bug problem, repossession of a dwelling and retraction of judgment.

– Legal opinions on housing law and cooperative law, including the process of relocation or transfer of dwelling, sanctions (suspension and exclusion) against members, dismissal of directors, the obligation of confidentiality of directors and control of cannabis.

– Drafting and complete revision of the building by-law and model notices to tenants of a major property manager.

– Involvement in demand in several class actions in environmental matters for noise, dust and floods, both against private companies and against the government of Quebec.

– Involvement in a class action seeking the civil liability of a large financial institution on behalf of investors for breaches of the standard of conduct of a prudent and diligent bank placed in the same circumstances.

– Representation of the plaintiff in a class action against mutual fund managers for failing to prevent or permit the practice of market timing in the relevant funds.

– Involvement in a class action seeking the City of Montreal’s civil liability for four floods in a few years in Rosemont.

– Management of the communication and disclosure of the evidence during the exploratory phase of several class actions and major files and pleadings at this stage of the litigation in the Superior Court and the Court of Appeal, both on the authorization and on the merit.

– Representation of housing cooperatives and individuals in the context of applications for judicial review by the Superior Court.

– Representation of housing cooperatives for defects in construction and deficiencies.

– Drafting and revision of various contracts.

Class Action Against CI and AIC

This class action alleges that CI, AIC and CIBC Asset management allowed frequent short term market timing transactions in some of their funds, such transaction having the effect of diluting the return of ordinary long term investors.
Read more

This class action alleges RBC's responsibility for the losses incurred by Canadian retail investors who had invested in Olympus United Funds Corporation and could not redeem their shares in June 2005. Mrs Calder argues that, without RBC's collaboration with the Norshield Group, the fraud of which the Canadian retail investors were victims would not have occured.
Read more

A Class action for obtaining a reduction to an acceptable level of the noise emanating from the ventilation system of the new McGill University Health Centre (MUHC) and compensation to the residents for loss of enjoyment of their properties and for all troubles and inconveniences they have suffered and continue to suffer because of nuisance noises from this system.
Read more